SHATIBI'S OBJECTIVES OF SHARI' AH AND SOME IMPLICATIONS FOR CONSUMER THEORY

The Objectives of Shari'ah
Many jurists have tried to explain the aims and objectives of Shari'ah upon which it is established. Among these the outstanding figures are the Malikite Abu Ishaq al-Shatibi, the Shafite al-'Izz ibn 'Abd aI-Salam, and the Hanbalite Ibn Qayyim al-Jawiziyyah. Shatibi is one of those few jurists who have discussed objectives of Shari'ah in elaborate details. This paper summarizes the main elements of Shatibi's discussion of the objectives of Shari'ah.
Definition of Maqasid AI-Shari'ah
Maqasid al-Shari'ah that is, the objectives of Shari'ah can be defined as below:
Shari'ah aims at the welfare of the people in this life and in the life hereafter, and for this purpose it has advised the people to adopt such means and measures suggested by it (Shari'ah) as may result in advantage benefit/well-being to them and may ward off evil/injury/loss, etcetera, from them, not only in this world but also in the world hereafter. Same is the philosophy behind His commands and the worships prescribed for His creatures.
Classification of Maqasid AI-Shari'ah
Provisions of Shari'ah aim at protecting its objectives. Objectives or Maqasid al-Shari'ah can be classified as under:
Daruriyyah (Necessities)
These are the objectives which are must and basic for the establishment of welfare in this world and the world hereafter in the sense that if they are f ignored then the coherence and order cannot be established and fasad (chaos and disorder) will prevail in this world and there will be obvious loss (al-khursan al-mubin) in the world hereafter.

Diagram 1: Path through which a person may seek his welfare.

Labels: SHATIBI'S OBJECTIVES OF SHARI' AH AND SOME IMPLICATIONS FOR CONSUMER THEORY 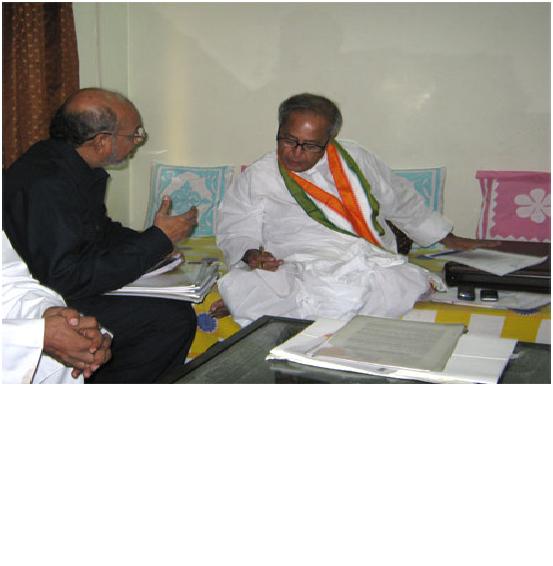 New Delhi: In a major development today in efforts to start Islamic Banking system in India, Union Finance Minister Pranab Mukherjee assured a delegation of Indian Centre for Islamic Finance that he would soon discuss the feasibility of interest-free Islamic banking system in India with Reserve Bank of India Governor.

To discuss about the feasibility of interest-free Islamic banking in India, a delegation headed by H Abdur Raqeeb, General Secretary, Indian Centre for Islamic Finance (ICIF), New Delhi, met Pranab Mukerjee today at his home in Kolkata, and submitted a memorandum to him.

After meeting with Mukherjee, Abdur Raqeeb told “The Finance Minister went through the 3-page memorandum and keenly read the recommendations of Raghuram Rajan committee on Financial Sector Reforms - CFSR recommendations on Interest-free banking which says: the Committee recommends that measures be taken to permit the delivery of interest-free finance on a larger scale, including through the banking system. This is in consonance with the objectives of inclusion and growth through innovation. The Committee believes that it would be possible, through appropriate measures, to create a framework for such products without any adverse systemic risk impact.”

He noted down that Interest-free Banking is not only for Muslims but for all. In Malaysia 40% customers are Chinese, who are Non-Muslim and In Britain 20% of customers are Non-Muslims. He also noted Vatican has recommended Islamic finance to western Banks for its emphasis on ethical investments and being socially responsible investment and an alternative to the conventional banking.

Finance Minister was informed about the decision of the Government of Kerala which had launched an Islamic investment company with Rs.1000 crore after the feasibility report of Ernst & Young and has plan to turn it to a Global Islamic bank after prevailing upon RBI to amend its Banking regulations.
Among the five options provided in the memorandum (Options of GOI) issuing directions and administrative guidelines, creating a subsidiary and going for an Act of Parliament also attracted his attention and he took note of it.

“FM said that he is going to meet RBI governor next week and will discuss with him on this issue. He also said that he will be visiting Saudi Arabia and will be available in the second week of November and then a meeting can be arranged with the secretaries and officials of Banking Department of Finance Ministry to interact with ICIF,” Abdur Raqeeb said.

Posted by Unknown at 1:35 PM No comments: